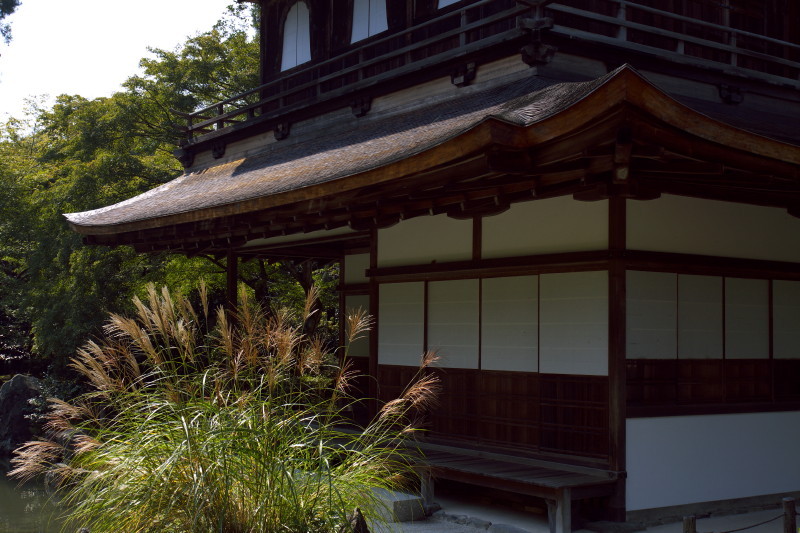 慈照寺 Jisho-ji Temple is commonly called 銀閣寺 Temple of the Silver Pavilion. The pavilion was established by the 8th Muromachi Shogun, 足利義政 ASHIKAGA Yoshimasa (1436-1490). 金閣寺 the Golden Pavilion, which was established by Yoshimasa's grandfather, 義満 Yoshimitsu, the 3rd Shogun, is really famous tor being decorated with gold leaf. You might expect the Silver Pavilion to be a silver version of the Golden Pavilion, but it's not. Why is this temple called the Silver Pavilion ? There are several different views about it. One said that Yoshimasa had planned to cover it in silver, but he died before its completion. Another said people in late years named the temple the Silver Pavilion just for attracting tourists. I believe that the faded black lacquered roof reflects the moonlight silverly.
October 9, 2011 @銀閣寺

Beautiful composition, I go for the tourist attraction. LOL!

Great angle, although it's just a part of it, we immediatly recognize the style of this house !

Nice frame with the fan of soft growing shrub in front. Thank you for the background on this very intriguing temple. A silvery roof will suffice for me. :)

One guesses the elegant architecture enhanced by the presence of the silvery susuki in autumn.