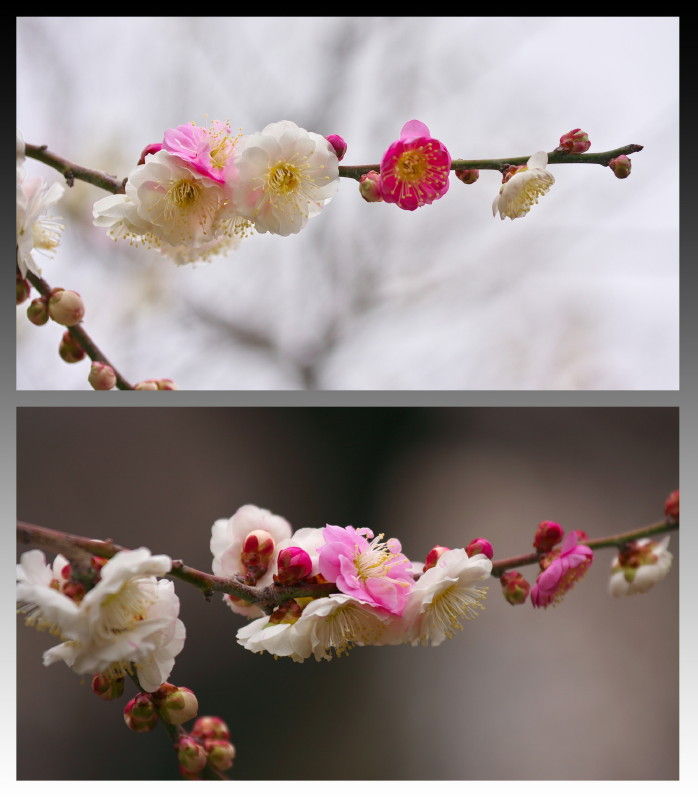 Almost thousand years ago, there were two leading Samurai families. One was "Minamoto", the other is "Taira". The two families confronted each other over power. Taira families prospered and Minamoto declined at one stage. Minamoto families picked up stream and Taira were banished from the capital at another stage.
White is the symbol color of Minamoto families and red is that of Taira families. Here, two families are blooming happily together. This is called 源平咲き Minamoto-Taira blooming.
February 28, 2010 @二条城

Well done! The colors are rich and very pleasing.

Loved it! And your little story enhanced it. Fabulous!

Beautiful flowers. I dislike this black frame . Does not match these gentle colors of flowers !

@MARIANA: I wanted to make it like a positive film print. I changed the frame. What do you think ?
black framed one

So lovely and delicate! And I love the symbolic story!

excellent macro.
the colours are great! and the depth of field makes the flowers stand out ever so much!

It looks much better now ;)

Lovely!! *I'm enjoying all of your pretty flowers shots :) cheers!

I have never seen the different colored blooms grow on the same tree. This is really amazing.